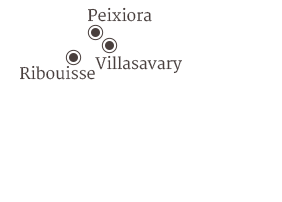 On the heights of the hills

On the heights of the windy hills, the heavy silhouettes of the mills were not blown away by the wind of Autan… they still stand, proudly, amid the rugged hills of the terrain. You will find many of them in the heart of the Cathar hills. Only some can be visited, but they all have a story to tell – a story of families and ancestors who worked to turn the blades of these stone giants.

The charming little town had up to eight mills, the last of which was erected in 1836 by the Bénazet family, a large tribe of local millers!

Standing on the highest point of the village, to the north of the Church and the Commandery, two of them show their conical trunk and pointed roof from the various roads that criss-cross the Lauragais corridor between Castelnaudary and Carcassonne. The oldest of the two, dating from the 16th century, built on a remarkable vaulted cellar that can be visited, now houses a veritable museum of milling tools. Finally, the most recent, from the 19th century, has retained much of its internal mechanism.

Below the village, the Roques Mill (Moulin de Roques), known as the Glacière, has retained its internal mechanism as well as its blades. Formerly owned by the Pelouse-Roques family, the last miller who owned the building, this 18th-century mill stopped turning in 1947.

Created in 1759, abandoned for almost half a century, the Coustou Mill (Moulin du Coustou) was restored in 1995. The mechanism, made entirely of wood, is a real marvel.

Onsite, using a mobile app, you can also visit the interior by flashing the QR Code or going to http://visitevirtuelle.villasavary.com/

Can be visited with the Association of Friends of the Mills of Pexiora (Association des Amis des Moulins de Pexiora), on request by calling

Private property. Not visitable. An explanatory panel tells you the great history of this mill next to the entrance.