France’s most famous southern waterway, a UNESCO World Heritage Site, meanders slowly here in the shade of plane trees. To be lulled by the rhythm of the calm water, from lock to lock, we find the forgotten gestures and sensations of the former sailors and boatmen who made the canal a lively place. Here, we abandon the rumbling of vehicles and the roar of engines, we lounge on the deck, we pedal or we walk along the towpaths… We let ourselves be won over by the tranquillity and beauty of the landscapes by forgetting the hassles of everyday life: we slow down, we enjoy our holidays along the water! 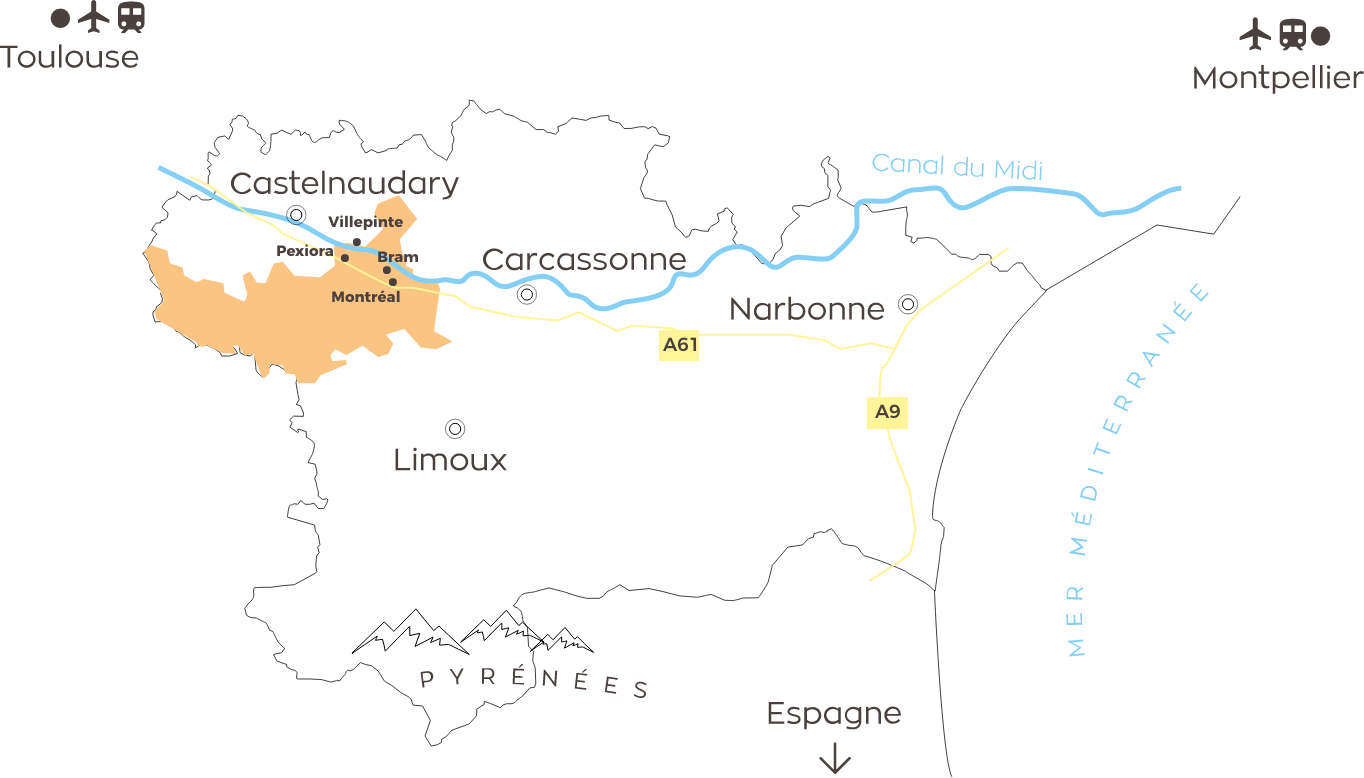 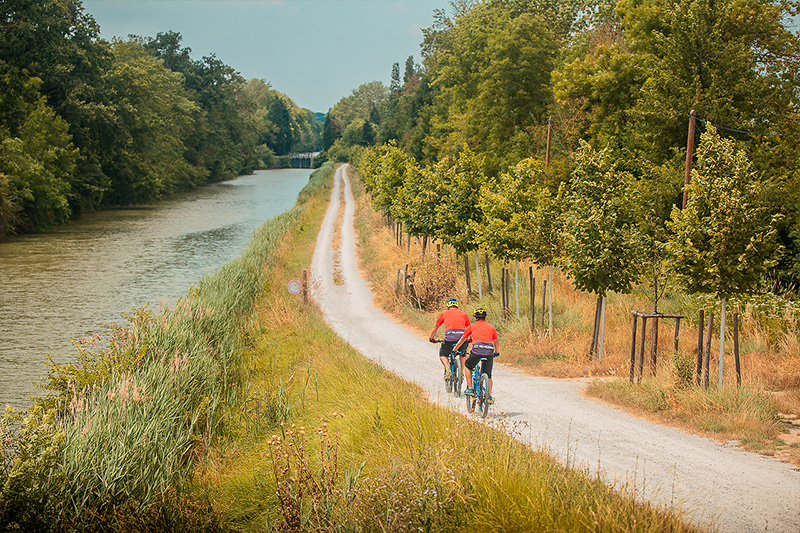 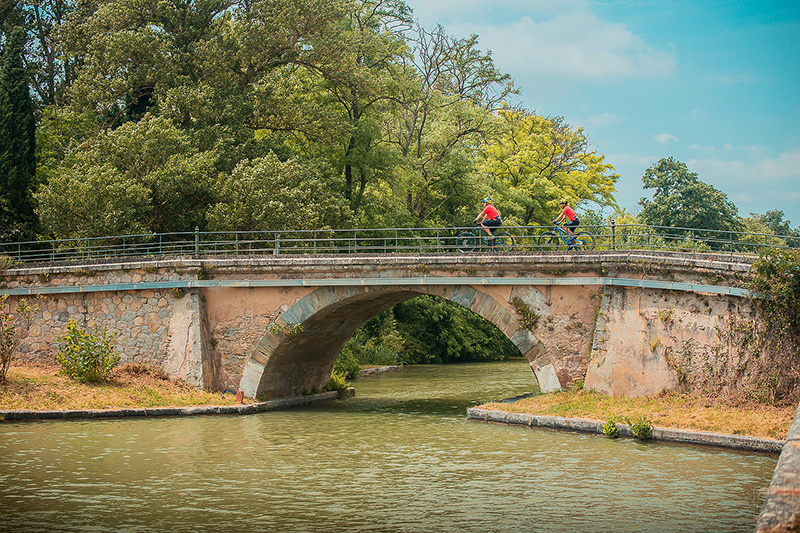 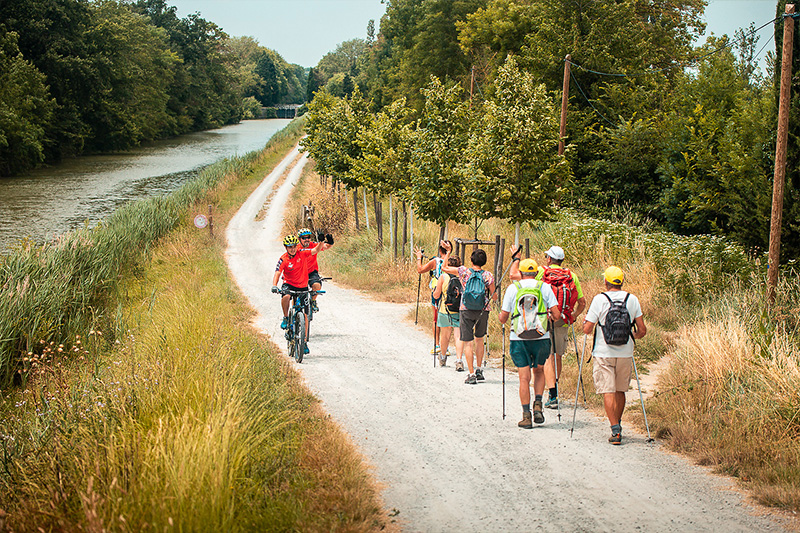 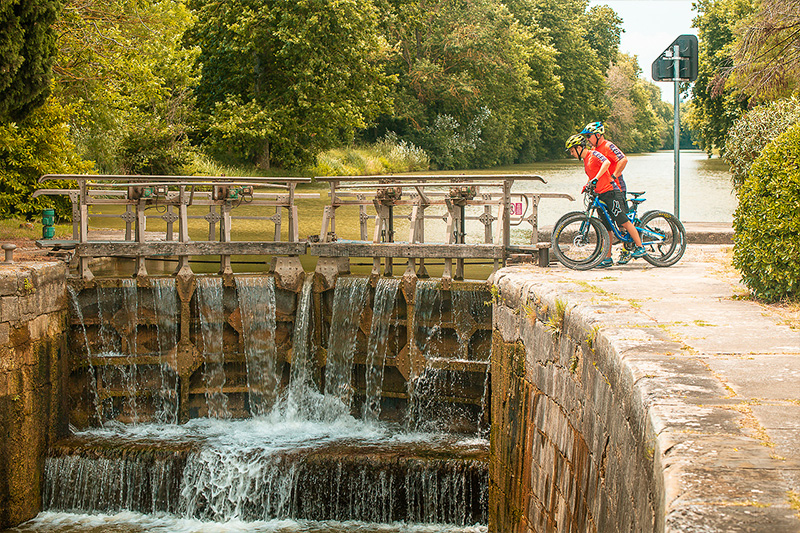 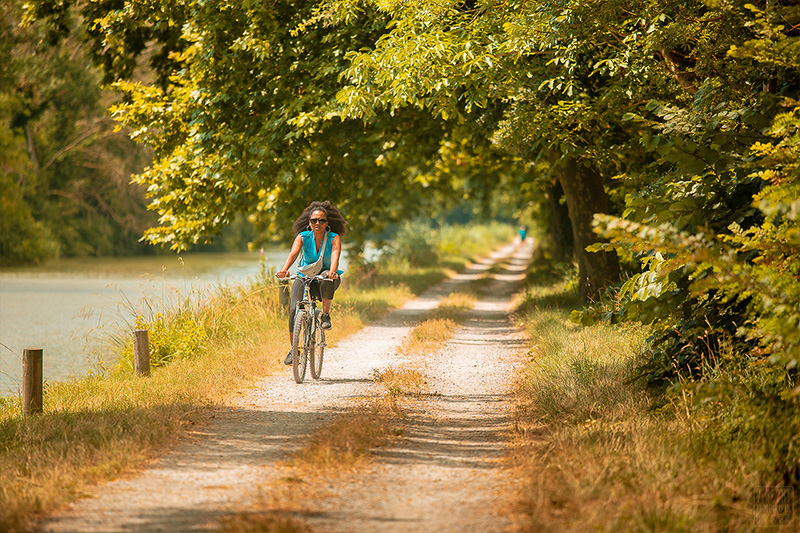 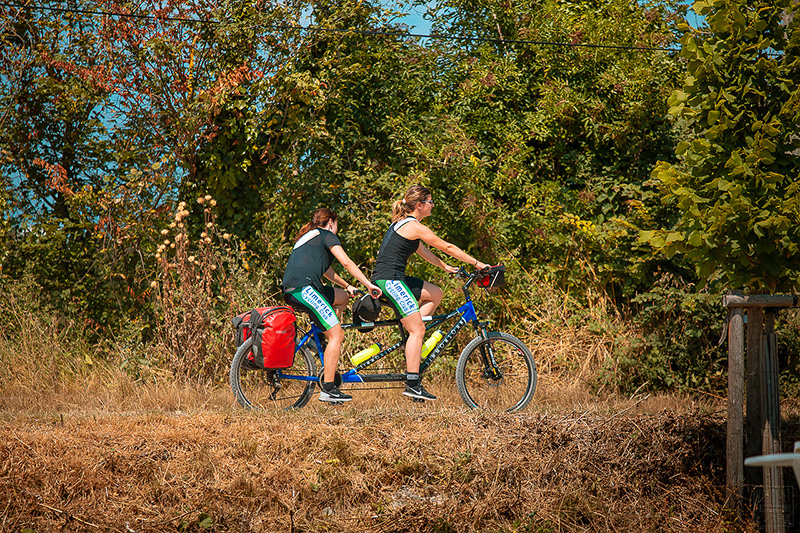 What better way to clear your head than by cycling along the 270 kms of towpath that adjoins the Canal du Midi? Hair in the wind, at the handlebars of your bicycle, you can reach Sète from Toulouse in a few days for the more sporty, or take the time to stop wherever you wish, near Pexiora, Villepinte, Bram or Montréal d’Aude…

FROM CASTELNAUDARY AND/OR BRAM

You don’t need a boating licence to take on the role of captain here, for a weekend, a week or a few hours. Just a short introduction to take control of the boat of your choice and then off you go on your cruise on the Canal du Midi. Stop in Bram to criss-cross the curved alleys of this rounded old Roman village, swim at Lake Buzerens, enjoy a tasty dish by the Canal, or even visit the Archaeological Museum of Eburomagus or the Maison des Essar[t]s… everything here encourages you to relearn the slowness and (re)discover the art de vivre of the South of France 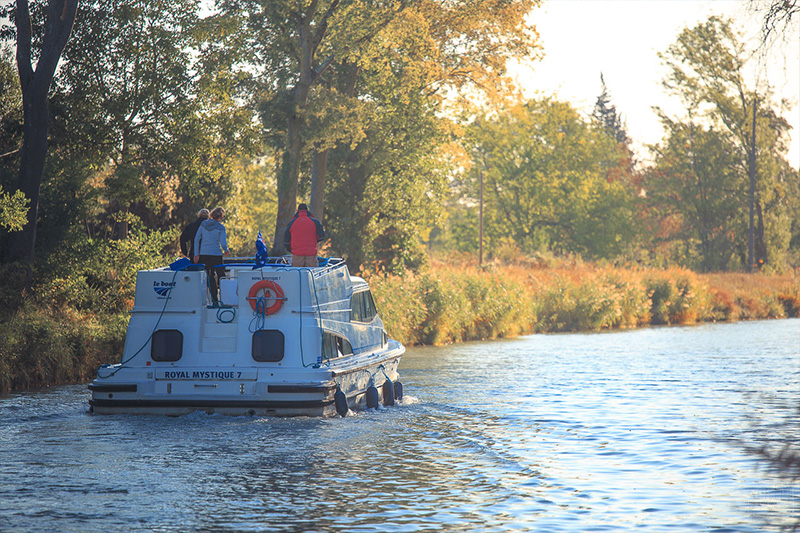 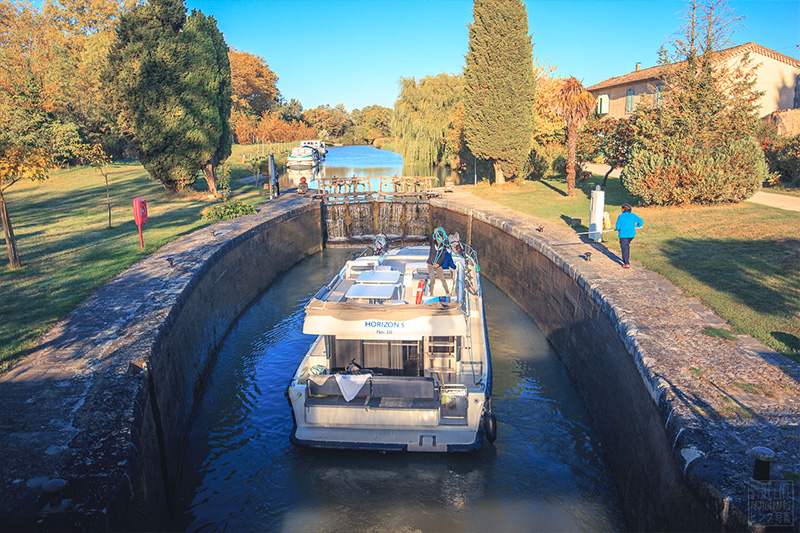 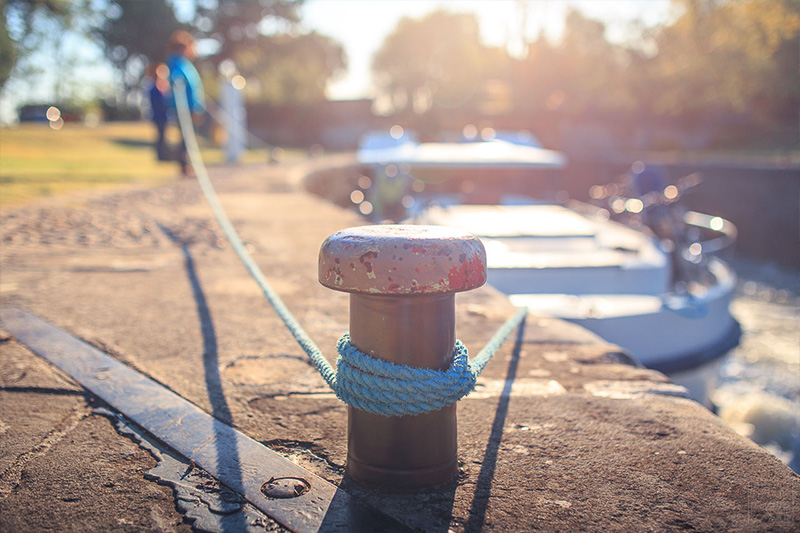 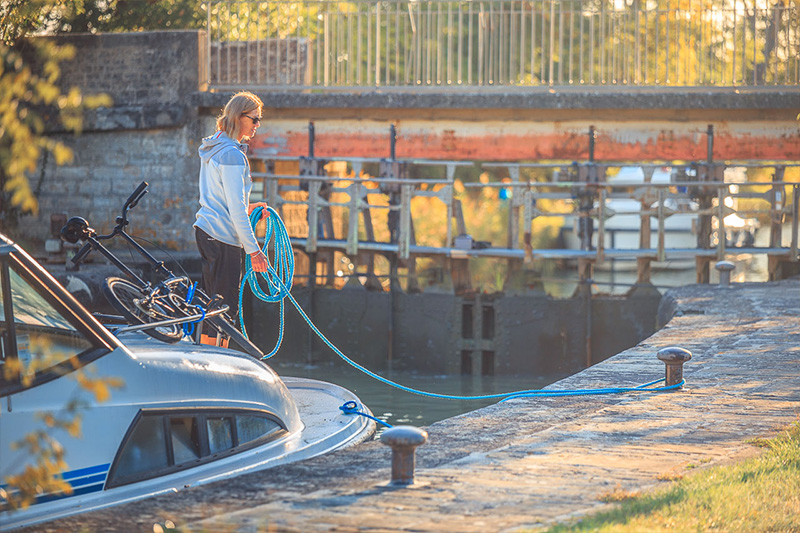 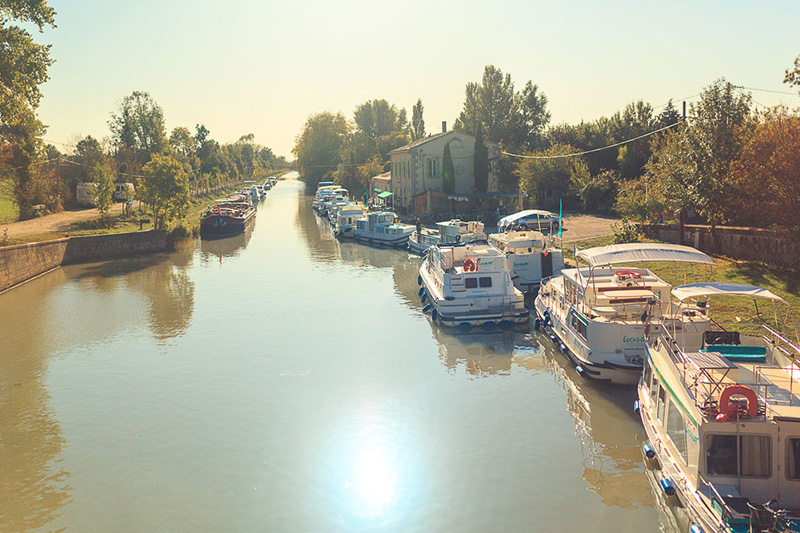 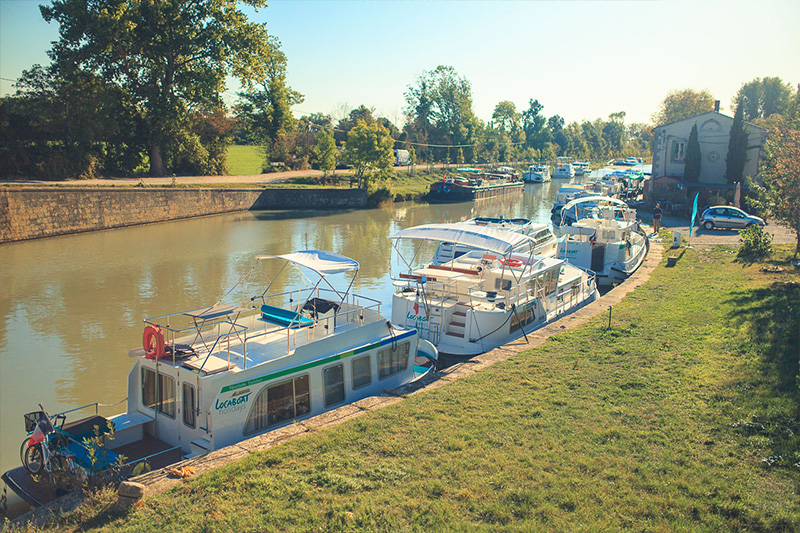 FROM CASTELNAUDARY TO CARCASSONNE, LITTLE TALES OF THE CANAL DU MIDI

The Villepinte Lock (L’écluse de Villepinte) is a classic structure whose lock chamber is presented in an oval plan, a feature largely common to the simple locks that line the Canal du Midi. It was built in the 17th century and then repaired in the 18th century. We often observe with pleasure the spectacle of passing a lock by boat… but it is a hundred metres away that we find a structure a little more unusual: an eight-arch spillway (a system that allows the drainage of a section of the canal between two locks to undertake work, cleaning, etc.).

Managing the Overflow of Water

Although Pierre-Paul Riquet, a genius designer of the Canal du Midi, succeeded in capturing the streams for the irrigation of the Canal du Midi, the management of the overflow of water quickly became a major concern, especially for his son. The winter floods, sometimes occurring very brutally, caused many disturbances both on the structure itself (silting, open breaches, deterioration of the locks), and on the surrounding areas. Thus, Riquet’s son had to ask Colbert’s son in order to request the services of the engineer Vauban. Thanks to the implementation of the corrective works recommended by the great engineer, the canal functions properly up to the present day. The Villepinte section presents various examples of these saving works: an 18th-century eight-arch spillway (for the evacuation of water), an aqueduct called Mézeran (allows the passage of the stream with the same name under the canal, like the little Tréboul Aqueduct, a little further on), as well as a waste weir (completed later on, it seems).

Opposite the spillway, a battery of twelve washhouses were set up on the canal to allow the local women of Villepinte to come and wash the laundry. That was a bit of a trek from the village! 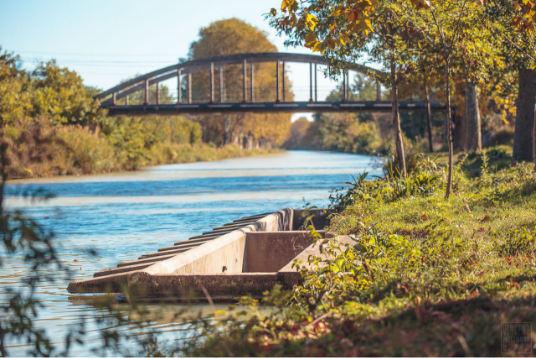 “Any skipper who will ship goods, commodities and other objects on the canal, will have to make a declaration of the quantity, quality, weight, mark, number and designation of the balls, barrels, crates and other objects that he will load […] The collection of navigation dues will be made on the gross weight of goods, including liquids. […] Every skipper will be forced to stop with his boat in front of each office of the canal, to take a passage ticket, and declare the goods he would have taken on the route from the last office… […] Navigation dues must be paid within three days of the unloading of the goods… […] Documentary proof is the passage ticket.