The bell tower of Fanjeaux, perched on the top of its 360 metres of altitude, like a lighthouse, radiates in the Lauragais plain for millennia. Its characteristic silhouette, in the middle of the hills, is a familiar landmark among the beautiful landscapes where cultivated expanses and sunflower fields alternate.

Situated at the crossroads of important trade routes, the town has been occupied since the Gallo-Roman period. On this natural hill, there was a Fanum Jovis (Gallo-Roman temple dedicated to Jupiter), which surrounded an oppidum. Later, in the 12th century, Fanjeaux became a powerful castral city, whose lord was none other than the Viscount de Trencavel, frequented by many noble families. Inside the fortified village, Guilhabert de Castres ran a House of Parfaits. In the shadow of the defence turrets, community workshops of Cathar weavers lived alongside the local populations.

That is why Dominic de Guzman chose to stay there between 1206 and 1216 to influence the region and preach the Catholic word. His preachings were a success, since on the eve of the founding of the Dominican Order, he set up a first community of converted nuns at the Monastery of Prouille. The golden legend began, miracles followed. But the people of Fanjeaux would still have to suffer the violence of the Crusade: in the time of verbal jousting, the clash of arms came after. In 1209, Simon de Montfort set up headquarters in Fanjeaux. After Dominic’s death in 1221, the Dominicans were sent by the Pope to participate in the Inquisition. The official records of the Inquisition trials conducted in 1246 recount the accounts of many inhabitants of Fanjeaux as well as the harshness of the time for the people and their lords who, dispossessed of their lands, suddenly find themselves condemned to flee and hide.

Placed on the route of the English incursion, the locality was burned by the armies of the Black Prince in 1355 and then quickly rebuilt. In the mid-15th century, the village prospered thanks to the cultivation of woad. Even today, during your walks, you will be able to meet a Dominican brother or sister: five religious communities live within the town of Dominic. 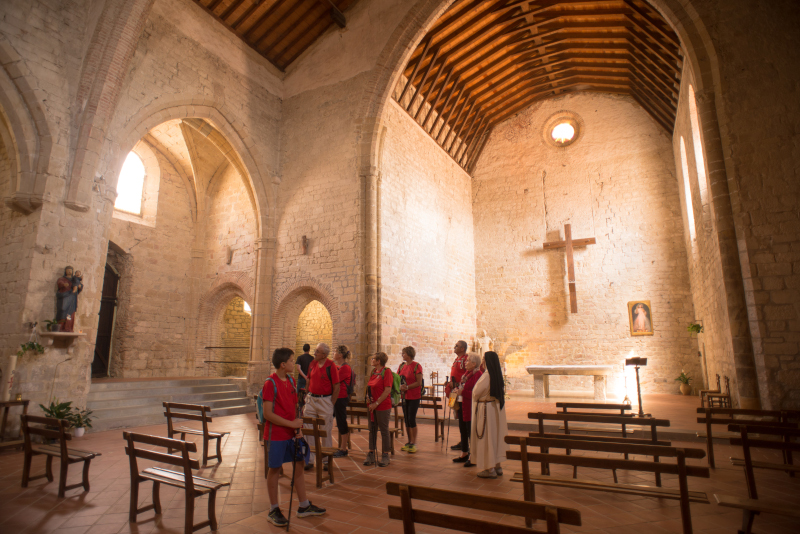 Founded in the 14th century, the former monastery of the Friar Preachers is now home to the Dominicans of the Holy Family. At the bottom of the monastery’s garden, the remains of the Chapelle du Miracle (Miracle Chapel) perpetuate the memory of an episode in St. Dominic’s life narrated by his contemporary, Pierre des Vaux de Cernai. At the time of the “dispute” of Montréal or Fanjeaux, the writings of the heretics thrown into the fire would have burned while those of the saint would have risen three times above the flames, even touching a beam of the ceiling, which has been preserved since the 19th century within the parish church. 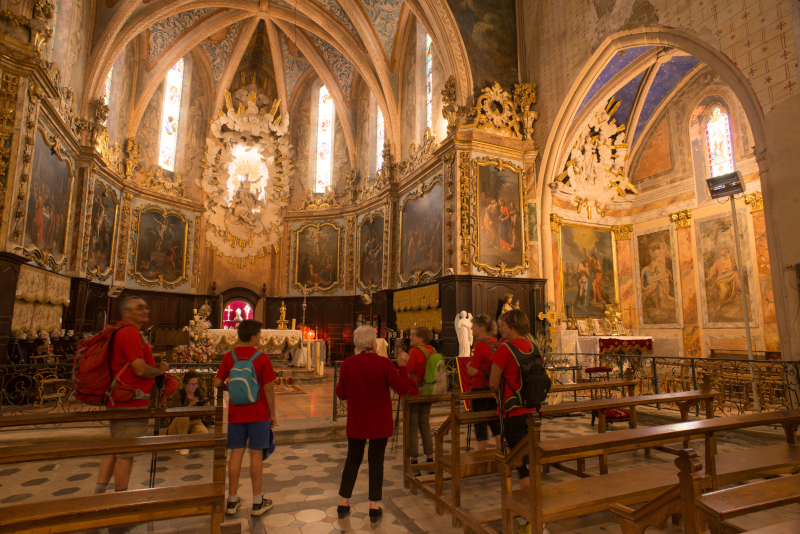 A listed Historic Monument, the present-day Notre-Dame de l’Assomption Church is said to have been built on the remains of a building of Romanesque origin, itself erected above the remains of the famous Fanum Jovis. The building is today a very fine example of southern Gothic art with a rich Baroque interior. Its powerful octagonal bell tower can be recognised from miles around and regularly rings out with its old bells. 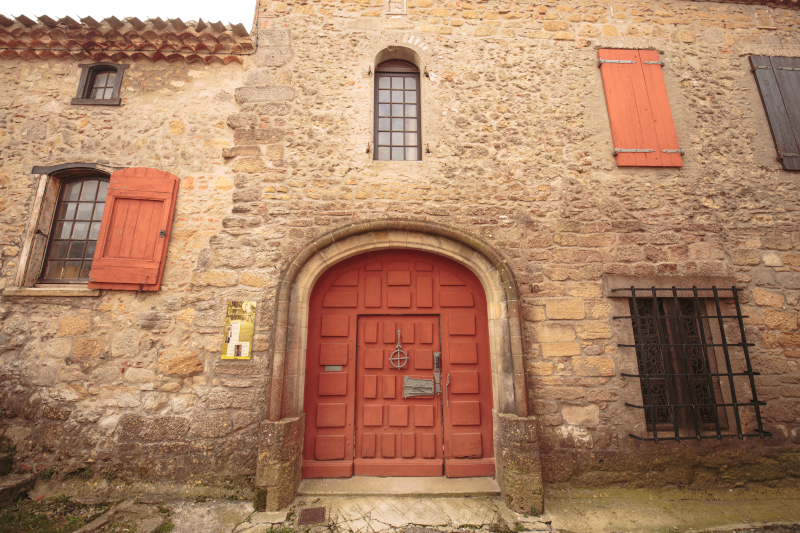 In this small district called Bourguet San Domenge, there is a long façade that remarkable for its carved wooden door and stained glass windows that depict six episodes of the golden legend of Dominic, the future founder of the Dominican Order. Legend has it that this is the location of the house where Dominic de Guzman settled between 1206 and 1216. The Dominicans of Toulouse, for their part, have made this house a memorial site of the founder of their order. The stained glass windows are by Jean Hugo, the great grandson of the famous Victor. 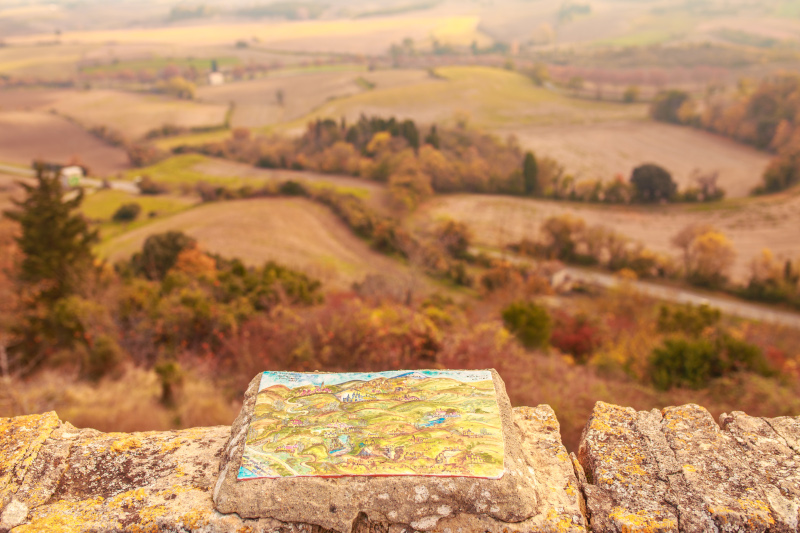 At the end of the village, this small terrace above the plain offers an extensive panorama. The hills are undulating, the fields of crops and verdure extend in the distance towards the Montagne Noire on one side, the Pic of Bugarach mountain peak on the other side, Mont Valier, and the Pyrenees. In this place of meditation, a gaze takes in all the diversity of landscapes that is reflected, albeit in disorder, on the decorative ceramics that embellish the parapet. The name comes from the Latin ‘Signum Dei’, the sign of God. From here, Dominic would have seen three fireballs plunge on Prouille… hence the foundation of the first religious community in the place that would become the Monastery of Prouille.

At the start of the Tourist Office, an artistic trail takes you to the heart of history (visit takes about an hour and a half). Ten sculpture works have indeed taken their place within the village and give tangible form to various historical episodes. They invite you to participate in history, to sit in their midst and listen to the dialogues of characters who have experienced the eventful history of this charming little town (audioguides for hire at the information desk of the Tourist Office at the village’s entrance: €4/person, or even download the free app In the Heart of the Cathar Hills to visit Fanjeaux and hike around the area).

The sculptures are by Loïc Tellier. Infused with poetry, Loïc Tellier’s work is part of an approach to artistic democratisation. Whether it is a drawing or a sculpture, the important thing is to give the main role to the person who is watching, to give them the opportunity to appropriate the work and thus to move from the rank of spectator to that of an actor. 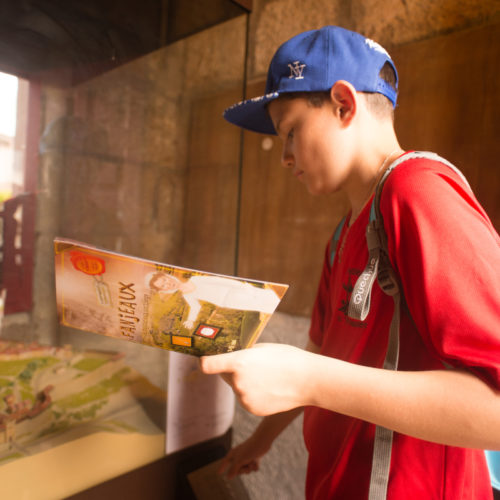 This treasure hunt is designed for children aged 7-12, and facilitates the family and fun discovery of the city of Fanjeaux. The story goes back to 1199. Catarina is eleven years old, her parents are weavers from the village. She finds a message from her best friend scrawled on a piece of cloth. This one has disappeared.

Listening to the stories and legends her parents told her, Catarina, worried, sets out to find her friend. Can you help her in her mission, solve the puzzles and thwart the intrigues that stand as obstacles in his way to find Guilhem?